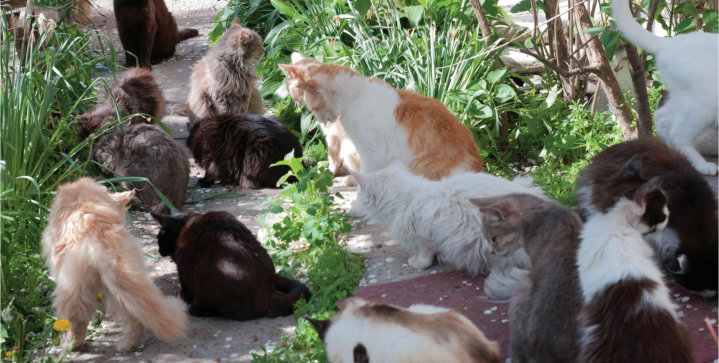 Does your timeshare resort have a cat problem? How you answer that question depends not only upon how many cats hang around your property, but also how you feel about cats. If you hate cats or are allergic to them, one cat on the premises is one cat too many. If you love cats, the more the merrier—until odors from cats’ bodily functions become offensive and over-population adversely affects the health of your entire cat community.
Ridding your resort of feral felines may be a desirable prospect, but it’s not realistic. You could trap your cats and cart them off to a shelter, where in many communities they would be euthanized. That’s a lose-lose situation—for the cats, for the staff or contractors engaged in catching the cats, and for the resort itself. Remove cats from your resort, and their neighbors from the surrounding real estate will move in to colonize the vacant ecosystem you’ve created. To paraphrase English poet and clergyman John Donne, no resort is an island, en-tire of itself; every resort is a piece of the continent, a part of the main.

If you can’t make your resort cat-free, at least try to control its feline population. Individual resorts and entire communities have successful neuter-release programs in which feral cats are trapped, spayed or castrated, and either released in their previous location or relocated elsewhere.
Over time, since a significant percentage of the cat population no longer breeds, its numbers should stabilize through attrition at a level that most people consider acceptable. La Costa Beach Club in Pompano Beach, FL, participates in the spay-neuter program at a local animal shelter, Noah’s Ark Inc. Margaret Johnson, who spent several years as the resort’s general manager, says having cats on the property helps keep rodents down.

“We have a family of cats who live in the area. They’re pretty docile,” she says, “A former employee who volunteers at Noah’s Ark still comes and feeds them in two different places on the resort grounds, and cares for them if they are sick.”

At a timeshare resort, herding owners and guests can get as complicated as herding cats. “The resort staff members tell the occupants not to feed the cats,” Johnson says. “If you feed them, next week you’re gone, and so is their food supply if the next people in your unit aren’t cat-friendly.” However, she concedes, “People still do feed the cats anyway.”

Lea Casa, a timeshare resort in Kailua-Kona, HI, on the west coast of Hawaii Island, has a similar problem with cat-feeding. “We post ‘Don’t feed the cats’ signs, but it doesn’t necessarily work,” says Steven Gilbert, the resort’s board president. “The island has a volunteer group that captures the cats, neuters them, and then releases them to a different part of the island. It’s semi-effective.”

Does your timeshare resort have a cat problem?

Where a neighborhood or community collaborates on a trap-neuter-release program for cats, shelter admissions and euthanasia rates may be expected to drop significantly. That’s what Dr. Julie Levy, a professor of shelter medicine at the University of Florida College of Veterinary Medicine, found in a two-year test of a trap-neuter-release program. She studied an urban area near the university in Gainesville, FL, with a history of high animal-control impoundments.

“Neutering a few cats here and there wasn’t making a big impact, so we wanted to pick a focused area and throw all our resources into it,” she said. At first Levy and her colleagues promoted the program through advertising, with scant results. Then she hired a local resident for person-to-person contact. “As we went door-to-door, we talked to people about how to care for all their animals, including other resources available for their pets,” she said. By-products of this effort included a decline in impoundment and euthanasia of stray dogs, and an increase in pet adoptions.

In Miami Beach, FL, a tourist-oriented city with an estimated human population of 91,917, a trap-neuter-release program for cats called Project CatSnip began in 2010. Project CatSnip recruits volunteers to set up feeding stations away from highly visible public areas. The volunteers also monitor the cats visiting these stations. Sterilized cats have the top quarter-inch of their left ear removed while under anesthesia; any free-roaming cat without this identifying ear-tipping mark becomes a candidate for humane trapping and neutering. In its first six years of operation, “more than 6,000 Miami Beach cats have been sterilized and re-released through the Project CatSnip program,” wrote City Commissioner John Elizabeth Aleman in a 2016 newsletter to residents. She also noted that “pet owners that can no longer care for their cats may be prone to set them free. Unfortunately, this perpetuates the feral cat problem in Miami Beach. Two unsterilized cats and their offspring can produce more than 11 million cats in only nine years!”

Although a trap-neuter-release program can reduce a community’s cat population and help to keep its rodent population in check, free-roaming cats remain a danger to wild birds. Cats are instinctive hunters. According to the National Audubon Society, they kill about 3.47 million birds a year in the United States alone. Thus, a shelter—as opposed to trap-neuter-release—helps to protect both feral cats and wild birds.

One such shelter, the Lana`i Cat Sanctuary on the island of Lanal, HI, provides a home to more than 575 sterilized cats. Begun in 2004 as a trap-neuter-release program, it evolved into a shelter after a biologist discovered a colony of endangered `ua`u (Hawaiian petrel birds) nesting on a mountain peak. The shelter reduces the pressure on these and other rare birds, while giving cat-lovers a focus for their efforts. The cats lucky enough to live in the Lana`i Cat Sanctuary have a three-acre fenced reserve in which to roam, structures for respite from sun and rain, all the food they can eat, veterinary care as needed, and an adoring cadre of human visitors. The place has become a tourist destination to which cat-lovers flock to admire and play with the feline inhabit-ants. Some visitors even adopt a cat—which entails a monthly stipend for the food and care of adoptees who remain at the sanctuary, but is free for those leaving the island. If the concept of a cat sanctuary appeals to you, read “Building your own cat sanctuary” by Keoni Vaughn, executive director of the Lanai Cat Sanctuary.

Other feral critters
The word “feral” has two definitions: an animal that escaped or was released from domestication and reverted to a wild state, and an undomesticated wild animal. Homeless cats and dogs are the most obvious and widespread examples of the first definition, but others exist. Feral chickens have overrun the island of Kauai, HI. Many descended from Asian red jungle fowl that escaped when Hurricane Iwa in 1982 and Hurricane Iniki in 1992 destroyed their coops. They thrive on Kaua`i in part because it’s the only major Hawaiian is-land where mongooses (members of the weasel family from Asia which feed on eggs) were not introduced. “These chickens … now occupy virtually every possible habitat on the island—the beaches, housing areas, re-sorts and hotels, shopping centers, and all the way to the tops of mile-high peaks,” wrote Phil Hixson in a recent TimeSharing Today article (Kauei: The Garden Isle, Issue #159 May-Jun, 2018, pp. 32-37).

Also considered feral are untamed animals that have never been domesticated. In this category, members of some species remain wild and free but derive benefit from living in close proximity to humans. Consider mice and rats, squirrels, opossums, raccoons, and—in some places—even bears. Some species of snakes enjoy sunning themselves on resort sidewalks and parking lots. Alligators lurk near water holes at golf courses in Florida and other southern states. Deer also dwell on the margins of human civilization. They’re beautiful and appealing, but problematic. They devour carefully tended landscaping, and they don’t look both ways before crossing a road at night.

In the Florida Keys, growing numbers of suburbanites commuting to Key West share a national wildlife refuge with diminishing numbers of diminutive, endangered key deer. The deer seem to know they’re protected; they’ve become extremely tame. If you’re hot and sweaty, and stand very still, they may approach you and lick the salty perspiration off your arms.

Among birds, blackbirds, grackles, English sparrows, and starlings are especially comfortable where people dwell, and sometimes reach nuisance population levels. Flocks of crows, sea gulls, and vultures congregate at land-fills and garbage dumps. Cattle egrets, emigrants from Af-rica, apparently crossed the Atlantic on their own and worked their way up the eastern seaboard of North America. You’ll see them feeding on insects stirred up by the hooves of cows—and the wheels of lawn-mowing tractors at some resorts. Within the last quarter-century, flocks of native white ibis also have be-gun to adapt to life in Florida’s timeshare resorts and residential communities. A pond at one end of Fantasy World Resort in Kissimmee, FL, supports a resident population of ducks, herons, and sandhill cranes. Although these birds remain wild, they have learned to beg for handouts from the humans in the adjoining timeshare units.